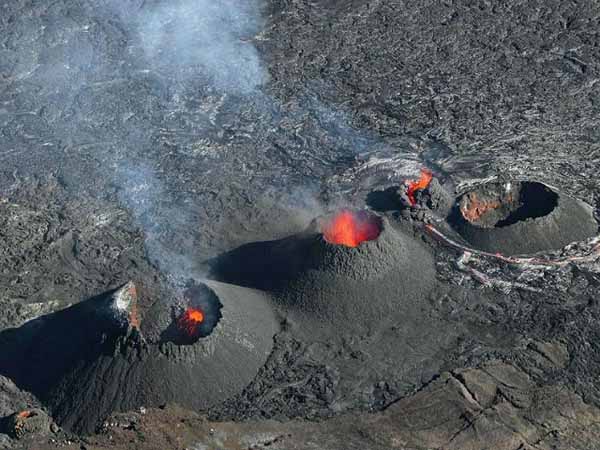 Piton de la Fournaise is a basaltic shield volcano on the eastern side of Reunion Island in the Indian Ocean. Piton de la Fournaise is one of the most active and the biggest volcanoes on Earth, along with Kilauea in the Hawaiian Islands (Pacific Ocean), Stromboli, Etna (Italy) and Mount Erebus in Antarctica. From the ocean floor, it is over 6,600 m tall. The base of the volcano has a diameter of 220 km.
Location: 21.23 S; 55.71 E.
Elevation: 2,631 m.
The Enclos Fouque, a caldera 8 kilometers wide, occupies the top part of the volcano. High cliffs known as remparts form the caldera’s rim. The caldera is breached to the southeast into the sea. It is unstable and is in the initial stages of failure. It will eventually collapse into the Indian Ocean to form giant landslides like those in Hawaii.
Three calderas formed at about 250,000, 65,000, and less than 5000 years ago by progressive eastward slumping of the volcano. Numerous pyroclastic cones dot the floor of the calderas and their outer flanks.